Nor’easter causes flooding, leaves hundreds of thousands in the dark 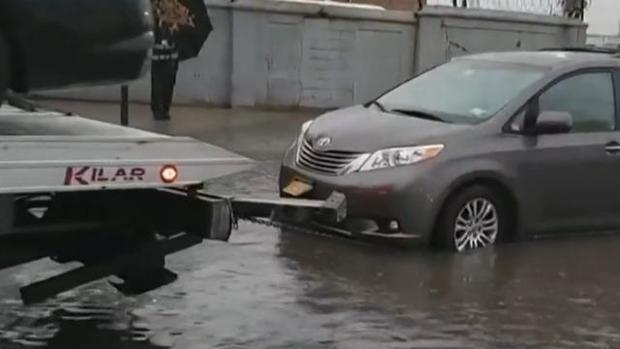 A powerful storm that slammed the Northeast Tuesday is expected to remain in the area as it slowly makes its way to sea.

Flooding and other damage have been reported from New Jersey to Cape Cod. Waves pounded the Massachusetts shore overnight. The Nor’easter’s brought nearly 90 mph winds, whipping water over entire houses.

Crews cleared the roads of fallen trees south of Boston but not before some trees knocked down power lines, putting tens of thousands of residents in the dark.

High winds uprooted a massive tree on Cape Cod, which caused it to slam down on top of a car. Luckily, the passenger inside wasn’t hurt. But just north in Duxbury, police say another tree fell, injuring at least one.

It’s a repeat for many areas that were blasted by Hurricane Ida nearly two months ago. Heavy rains flooded Ridgewood High School’s football field again after it had just gone through costly repairs due to Hurricane Ida.

In upstate New York, a flooded creek swallowed a park and knocked trees down.  In Manhattan, passengers boarded subway trains as water trickled in from above.

Hundreds of thousands are without power in Massachusetts. There are still high wind warnings and a flood watch in effect but the stormy conditions should make their way out of the area as the day goes on. New York and New Jersey’s governors declared a state of emergency ahead of the storm. Parts of New York, New Jersey, and Connecticut all saw more rain yesterday than they typically get in an entire month.