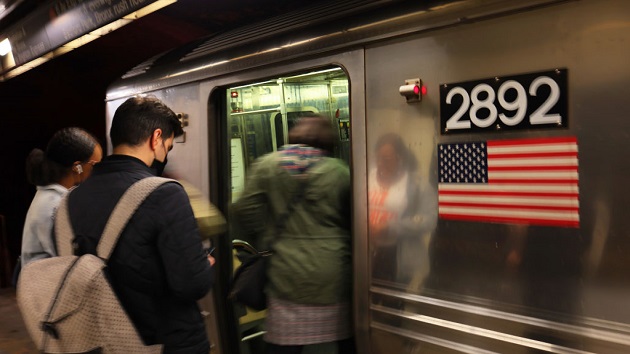 NEW YORK, NEW YORK - APRIL 13: People prepare to enter the Q train at the Church Avenue subway station on April 13, 2022 in the Sunset Park neighborhood of Brooklyn in New York City. A manhunt is underway for a gunman who shot 10 people, critically injuring five on the N train during Tuesdays morning rush hour. The suspect wore a gas mask and tossed smoke grenades on the floor before firing 33 shots before leaving the scene. At least 13 other commuters suffered injuries due to smoke inhalation, falls, and panic attacks. The police on Tuesday evening named a "person of interest" in the mass shooting and believe that they have found his personal belongings left on the train that includes a Glock 9-millimeter handgun and a key to a U-Haul van. (Photo by Michael M. Santiago/Getty Images)

(NEW YORK) — Police have identified a person in connection with the unprovoked fatal shooting of 48-year-old Daniel Enriquez on a Q train in New York City on Sunday, according to police sources.
The person, who is still at large, is a 25-year-old man from Brooklyn with about 20 prior arrests, including an outstanding gun charge from last year. He also has prior arrests for assault, robbery, menacing and grand larceny, sources said. His name has not been released.

Detectives have also recovered the gun used in the shooting.

It is believed the suspect handed the gun to a homeless man as he fled the Canal Street station. The homeless man then apparently sold the gun for $10 to a third person, who reported it to police, the sources said.

The New York Police Department released surveillance photos Monday of the suspect believed to have shot Enriquez taken shortly after he exited the subway.

The motive for the shooting is still unknown.

Witnesses say the suspect was pacing back and forth in the last car of a Manhattan-bound train around 11:45 a.m. when he pulled out a gun and fired it at Enriquez unprovoked, according to NYPD Chief of Department Kenneth Corey.

The shooting comes a little over a month after a Brooklyn subway rider opened fire on a train car, wounding 10 people. The suspect in that shooting, Frank James, was arrested one day later in lower Manhattan.

Transit crime is up 62.5% in the city year-to-date from 2021, according to NYPD statistics.