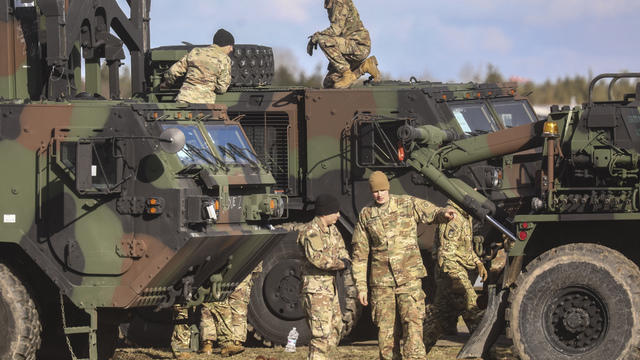 ▶ Watch Video: U.S. warns Russia could invade Ukraine at any time
Russia’s Ministry of Defense said Tuesday that some of the forces the country had massed close to its border with Ukraine over the last four months were being pulled back to their bases. The buildup of well over 100,000 troops and a significant portion of Russia’s military hardware along Ukraine’s borders has drawn increasingly dire warnings from the United States of a possible imminent invasion.

The Russian government has always maintained the buildup poses no threat to Ukraine and that its troops would return to their bases after carrying out their war games. But the biggest buildup of ground forces and war machines in Europe since the Cold War has set off alarm bells for months in the West.

Not even 20 hours prior to Moscow’s announcement on Tuesday, a U.S. official told CBS News senior national security correspondent David Martin that some of the Russian hardware taking part in the drills had started to move into “attack positions” close to the Ukrainian border.

There was no immediate confirmation from U.S. officials of any Russian redeployments away from Ukraine’s border, but Russian Defense Ministry spokesman Igor Konashenkov told reporters on Tuesday that some units that have been operating for weeks along the country’s southwest border with Ukraine, “having completed their tasks, have already begun loading onto rail and road transport and today they will begin moving to their military garrisons. Individual units will march on their own as part of military columns.”

The ministry provided no numbers, and it was unclear exactly where along Russia’s long border with Ukraine the movements might be occurring.

While the Russian government released video that it said showed tanks rolling in a column to be loaded onto trains for transport back to bases deeper in Russian territory, the most recent satellite imagery from the West, provided on Monday by Maxar

If confirmed, it could be taken as the first significant step by Russia to deescalate a crisis that has brought the world closer to a major conflict in Europe than it’s been in decades. President Joe Biden had warned that a full-scale Russian invasion of Ukraine could leave 100,000 civilians dead, and fundamentally change the world.

The U.S. and its NATO allies have heaped pressure on Russian President Vladimir Putin’s government to take a step back from the brink of war, threatening a “swift and severe” response to any invasion of Ukraine in the form of international sanctions.

After the Russian defense ministry’s announcement on Tuesday, Ukraine’s foreign minister said his country’s diplomatic efforts with the U.S. and European allies had managed to ward off a Russian invasion.

“We and our allies have managed to prevent Russia from any further escalation. It is already the middle of February, and you see that diplomacy is continuing to work,” Foreign Minister Dmytro Kuleba told reporters in the Ukrainian capital of Kyiv.

It was not clear how significant Russia’s initial step back from the border, if confirmed, would be considered by Washington or NATO. About 30,000 Russian forces are still in Belarus on Ukraine’s northwest border for joint drills with Belarusian troops, and they have been operating within 30 miles of the frontier.

American officials have warned for weeks that Russia could launch an attack on Ukraine in a variety of ways, including a ground assault from Belarus or Russian soil, a major cyberattack, or a so-called “false-flag” attack staged to look like an assault by Ukrainian forces against pro-Russian fighters that Moscow might use as a pretext to launch an invasion.

Russia backs separatists in eastern Ukraine’s Donbas region, where the rebels have fought a simmering war with Ukrainian troops since Putin last sent his forces into Ukraine in 2014, unilaterally annexing the Crimean Peninsula in the process.

Earlier on Tuesday, a Russian envoy to the European Union was quoted as saying that Russia would “respond” if any Russian “citizens” were killed anywhere, including in Donbas.

The Kremlin, meanwhile, blasted the escalating warnings from Washington about a possible imminent Russian attack on Ukraine as “dangerous “hysteria” on Tuesday, with spokesman Dmitry Peskov mocking the U.S. for suggesting it had knowledge of Moscow’s intentions.

Peskov asked reporters if the “exact time of the start of the war” had been published.

Russia was keeping the pressure on, meanwhile. Its parliament passed legislation on Tuesday that calls on the country to formally recognize two regions in Donbas held by pro-Russian rebels as independent from Ukraine. It would be a hugely provocative move and likely lead to an escalation of the nearly-eight-year-old conflict in Donbas, but Peskov said Putin had made no final decisions on whether to back the initiative.

The West’s diplomatic blitz continued, too. German Chancellor Olaf Scholz was to meet Putin in Moscow on Tuesday, a day after he met in Kyiv with Ukraine’s president. Peskov told reporters the negotiations between Putin and Scholz were expected to be long as they discuss “security guarantees” and the “unprecedented tension” in Europe.

Clearly there was hope in Ukraine’s capital on Tuesday that the global standoff between the east and west — with the Ukrainian people caught in the middle — had turned a corner.

It remained unclear, however, whether the U.S. government would accept Russia’s announcement as a step back from the brink of a potentially catastrophic war.