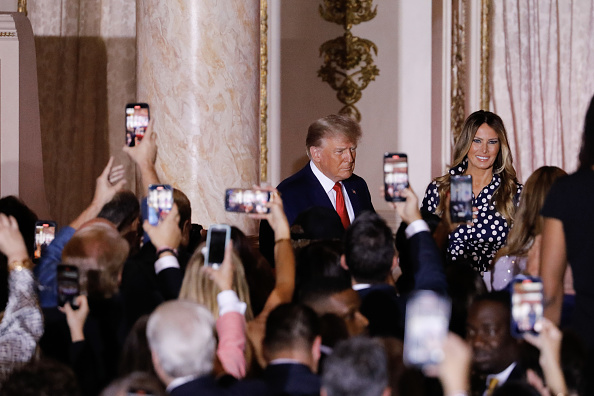 (WASHINGTON) — Former President Donald Trump has officially announced he is running for president in 2024, marking his third bid for the White House.

Saying “We are a nation in decline” and “America’s comeback starts right now,” Trump made the announcement Tuesday night in an address from his Mar-a-Lago estate in Palm Beach, Florida.

The announcement, which Trump had been hinting at for months, comes as the embattled former president faces multiple criminal and civil investigations and as his party is grappling with a worse-than-expected showing in the midterm elections, raising questions about the former president’s power over the GOP.

Trump, who lost his reelection bid in 2020 but did not concede and has continued to spread false claims that the 2020 election was “rigged” and “stolen,” repeatedly teased another run for the White House throughout the last year and told a rally crowd last week to expect a “big announcement.”

The third presidential run for Trump, who transformed himself from a real estate mogul into a reality TV star before becoming the self-described “MAGA king,” comes at an unprecedented point in American history that sees a former one-term president who never conceded his election loss enter a bid to regain power as the frontrunner for his party’s nomination.

Trump’s election falsehoods culminated on Jan. 6, 2021, in a violent attack on the U.S. Capitol that was carried out by pro-Trump supporters, for which nearly 1,000 people have now been criminally charged. The former president has repeatedly downplayed the riot and has vowed to pardon those charged in the attack if he becomes president again.

In addition, Trump’s namesake family real estate business, The Trump Organization, is currently on trial in New York for tax evasion and fraud — charges that would not be affected if he’s reelected president. The company has denied wrongdoing.

Trump, who was twice impeached during his four years in office but was not convicted either time, maintains a tight grasp on his Republican base. Six in 10 Republicans back the former president as their party’s leader, according to an ABC News/Washington Post poll from earlier this year.

In the lead-up to the 2022 midterms, Trump’s Super PAC poured millions into key races, and the former president wielded his political power by endorsing hand-picked candidates for major congressional seats, including Senate candidates Mehmet Oz in Pennsylvania and Herschel Walker in Georgia. The former president ramped up his already busy rally schedule in the final weeks of the campaign, holding multiple events over the weekend leading into Election Day.

But after at least 30 of Trump’s endorsed candidates, including Oz, lost their races, some have begun to question his ability to continue winning elections for the party.

Trump has already taken aim at some potential presidential primary opponents, including possible 2024 rival Ron DeSantis, who on Tuesday cruised to reelection as governor of Florida. In a statement released last week, Trump attacked DeSantis as an “average” governor, saying that DeSantis was “politically dead” until Trump endorsed him in 2018 and griping over DeSantis’ refusal to say whether he’ll run for president in 2024.

“Well, in terms of loyalty and class, that’s really not the right answer,” Trump said, disparaging the Florida governor as “Ron DeSanctimonious.”

Sources close to Trump say he has soured on DeSantis as the Florida governor’s political star has risen and as some in the party have expressed that they would prefer DeSantis to run for president instead of him.