Trump fires Esper as Pentagon chief after less than 2 years 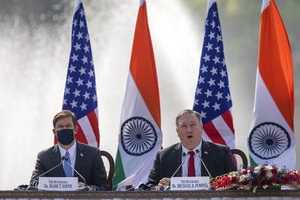 U.S. Secretary of State Mike Pompeo, right, speaks with Secretary of Defence Mark Esper seated beside him during a joint press conference with their Indian counterparts at Hyderabad House in New Delhi, India, Tuesday, Oct. 27, 2020. With President Donald Trump in a tight race for a second term against former Vice President Joe Biden, Pompeo and Esper sought to play on Indian suspicions about China to shore up a regional front against increasing Chinese assertiveness in the Indo-Pacific region. (AP Photo/Altaf Qadri)

Presidents who win reelection often replace Cabinet members, including the secretary of defense, but losing presidents have kept their Pentagon chiefs in place until Inauguration Day to preserve stability in the name of national security.

“Chris will do a GREAT job!” Trump tweeted. “Mark Esper has been terminated. I would like to thank him for his service.”

Esper’s strained relationship with Trump came close to collapse last summer during civil unrest that triggered a debate within the administration over the proper role of the military in combatting domestic unrest. Esper’s opposition to using active duty troops to help quell protests in Washington, D.C., infuriated Trump, and led to wide speculation that the defense chief was prepared to quit if faced with such an issue again.

Officials familiar with internal discussions say Esper has been ready to resign for months, and as rumblings about Trump’s unhappiness with him have grown, he’s taken additional steps to prepare to step down.