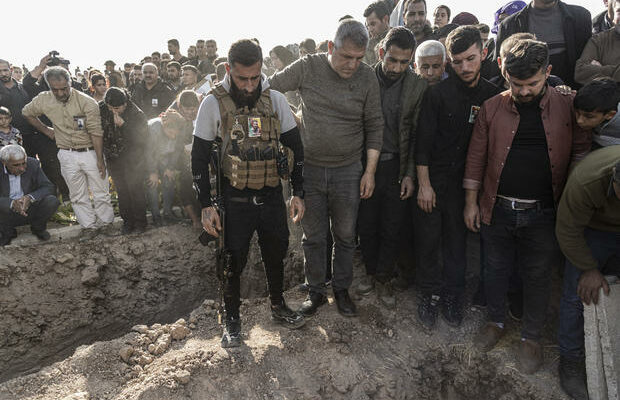 Qamishli, Syria — A Turkish drone strike hit a base in northeast Syria used jointly by Kurdish forces and the U.S.-led coalition on Tuesday, the Kurds and a war monitor said. Two fighters of the Kurdish-led Syrian Democratic Forces were killed, an SDF spokesman said, but no U.S. troops were there or in danger, according to the U.S. Central Command.

“A joint base north of Hasakeh used for planning and executing joint operations against the Islamic State group (ISIS) has been hit by a Turkish drone,” SDF spokesman Farhad Shami, told AFP.

U.S. forces “were not in danger” during the strike, said the U.S. military’s Central Command.

“No strikes occurred at locations housing U.S. personnel,” Centcom said, adding that the closest strike hit about 12-18 miles away from U.S. troops.

“These actions threaten our shared goals, including the continued fight against ISIS to ensure the group can never resurge and threaten the region,” he said.

Since Turkey launched a new air campaign against Kurdish rebel groups across Iraq and Syria on Sunday — some of which are linked to militias on which the U.S. military has relied heavily as allies during its own operations in Iraq and Syria – Ankara has come under massive pressure from Washington to hold off on a long-threatened ground operation into Syria.

Turkish President Recep Tayyip Erdogan has voiced growing defiance in the face of the U.S. warnings, promising Tuesday that the air campaign would be followed “soon” by a ground offensive.

“We have been on top of terrorists for a few days with our planes, cannons and drones,” Erdogan said in a televised address. “God willing, we will root out all of them soon with our tanks, artillery and soldiers.”

Dubbed Operation Claw-Sword, the air raids followed a bombing in Istanbul that killed six people and wounded 81. Ankara blamed the attack on the outlawed Kurdistan Workers’ Party (PKK), but the group, which is blacklisted as a terror group by the European Union and the U.S., has denied responsibility.

In Syria, the principal target of the Turkish campaign is the Kurdish People’s Protection Units (YPG), who dominate the SDF. Washington forged a close alliance with the SDF during its successful military campaign to oust ISIS from Syrian territory, but Ankara regards it as a terror group linked to the PKK.

In a veiled reference to Washington, Erdogan said Tuesday that his government knew “who protects, arms and encourages those terrorists.”

“The road has come to an end for those who think they can keep Turkey waiting by playing with letters and changing the name of the terrorist organization,” he said.

Tehran has accused the separatist groups of stoking the unprecedented wave of anti-government protests sweeping across the Islamic Republic. Iran has been shaken by more than two months of civil unrest sparked by the death of Kurdish-Iranian woman Mahsa Amini, 22, after her arrest for allegedly breaching Iran’s strict dress code for women.

The report said the headquarters of the Kurdistan Freedom Party “was targeted by missiles and suicide drones” near Kirkuk. An Iraqi Kurdish military official, a local police officer and a party spokesman confirmed renewed strikes on the region to AFP.

“We had taken our precautions and emptied the premises, there were no casualties,” Kurdistan Freedom Party spokesman Khalil Nadri told AFP.

In Tuesday a statement, the U.S. State Department’s spokesman Price expressed the Biden administration’s “sincere condolences for the loss of civilian life in Syria and Turkey.”

“We urge de-escalation in Syria to protect civilian life and support the common goal of defeating ISIS,” he said, adding that the U.S. continued to “oppose any uncoordinated military action in Iraq that violates Iraq’s sovereignty.”

Iraqi Kurdistan has hosted several Iranian-Kurdish opposition groups since the 1980s, which have in the past waged an armed insurrection against Tehran. In recent years their activities have declined, but the new wave of protests in Iran has again stoked tensions.