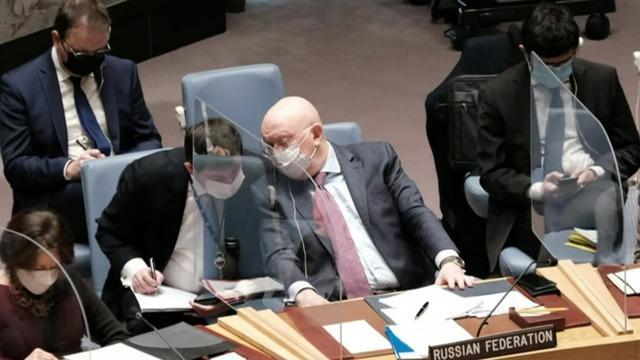 Ämari Air Base, Estonia — Six American F-15s and the U.S. Air Force personnel to fly them have arrived at an airbase in Estonia. The deployment is just part of the Biden administration’s efforts to bolster NATO defenses on the far eastern edge of Europe amid soaring tension with Russia.

Russian President Vladimir Putin gave no indication on Tuesday that he was about to bow to pressure from the U.S. and its allies to start pulling back the 100,000-plus forces he has positioned around Ukraine‘s borders. Instead, he reiterated his accusation that NATO and the U.S. are causing the tension by placing missiles and troops in countries close to Russia’s western borders and ignoring his demands for “security guarantees” from the alliance.

Putin accused the U.S. of using Ukraine as a pawn in a bid to “contain” Russia, portraying his own country as the victim even though the current crisis grew out of his still-unexplained decision to deploy tens of thousands of troops around Ukraine’s borders. The Kremlin has insisted for months that it’s merely for exercises, and that Russian can do what it wants with its own forces on its own soil.

But it was only eight years ago that Putin’s forces last pushed into Ukraine, to fight alongside separatists who are still locked in battle with Ukrainian troops in the country’s east, and to facilitate his annexation of the Crimean Peninsula away from his neighbor. Few countries recognize Putin’s 2014 landgrab, but he made it clear again on Tuesday that, as far as his government is concerned, Crimea is now Russian territory.

New images released this week by the Maxar satellite company show Putin’s military buildup continuing in Crimea, which most nations still consider an occupied part of southern Ukraine, and to Ukraine’s north in Belarus, and to its east, on Russian soil.

“During the past couple of weeks, several new significant military deployments have been observed in Belarus,” Maxar said in an analysis accompanying its latest images. I said the pictures show new housing for forces, “at virtually every deployment location in Belarus, Crimea and western Russia,” indicating an “increased level of activity and readiness.”

President Biden has said there’s a “distinct possibility” that Russia will invade Ukraine again this month, and the White House and its allies have said if that happens, it will be considered not only an aggression against an ally, but an assault on the basic tenets of European security that have kept relative peace on the continent since the end of World War II.

The U.S. F-15s now in Estonia — a NATO ally that shares a land border with Russia — joined Belgian F-16s as part of a multinational force conducting air patrols along the alliance’s eastern flank this week.

As CBS News senior foreign correspondent Charlie D’Agata reports, the sub-freezing temperatures in Estonia are a far cry from North Carolina, where the planes and personnel of the U.S. Air Force’s 336th Fighter Squadron are based. Around 120 U.S. personnel have been deployed to the Ämari Air Base, near Estonia’s capital of Tallinn and right on Russia’s doorstep, along with the fighter jets.

D’Agata watched as American F-15 Screaming Eagles soared into the sky from Ämari in a show of U.S. military firepower. The message to NATO allies along the border separating European democracies from Russia is clear: The U.S. has your back.

The message to Russia is just as clear: We’re watching.

The U.S. fighter squadron in Estonia is taking part in what NATO calls an “enhanced air policing mission.”

“This is a team effort from the NATO alliance,” Lieutenant Colonel Taylor Gifford, the 336th squadron’s Director of Operations, told D’Agata.

That cooperation is vital, because the Baltic states of Estonia, Latvia and Lithuania — all NATO members — are sandwiched between Russia, its ally Belarus and the Baltic Sea.

The Russian military has already deployed fighter jets to the region, launched naval exercises in the Baltic and rolled missile systems and troops into Belarus. Moscow says it’s just for exercises, but U.S. officials believe Putin could use the presence in Ukraine’s northern neighbor, or in Crimea, as potential routes for an invasion.

The NATO mission in Estonia was created as a direct response to Russian military aggression. Now, with Moscow threatening once again, it’s never been more vital to security in the region. Steps to bolster NATO’s presence in the Baltics with additional U.S. forces began after the Russian incursion into eastern Ukraine and annexation of Crimea in 2014.

The commander of the Estonian Air Force, Brigadier General Rauno Sirk, told CBS News the U.S. jets that arrived this week are vital, “to bolster, to strengthen the air policing here and to show that the alliance is taking its business seriously.”

Eastern European leaders are calling for more U.S. military support in the region, including Estonia’s prime minister, who said the only thing Russia respects is “an American flag.”