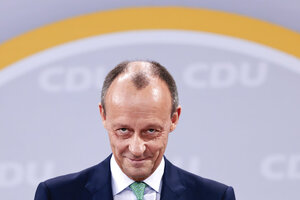 Merz received 94.6% of the vote from 983 delegates who cast ballots during an online party convention. The vote was mostly a formality since he won 62.1% in balloting among the party membership in December, defeating two centrist contenders.

In a livestreamed speech to the delegates, he took several digs at new Chancellor Olaf Scholz for, as Merz put it, not immediately engaging with the U.S. and Russia after taking office and not mentioning the country’s armed forces in his first speech in parliament.

For legal reasons, Saturday’s result must be confirmed by mail ballot.

After losing the September election with its worst-ever national result and the chancellorship Merkel held for 16 years, the CDU is now Germany’s biggest opposition party. Merkel’s centrist approach won repeated reelection but left some conservatives grumbling that the party had lost its clear profile with voters.

A fight last year for the nomination for chancellor between former party leader Armin Laschet and Markus Soeder, the leader of the CDU’s Bavarian sister party, the Christian Social Union, exposed divisions and played a role in the party’s dismal result of 24.1%.

Merz, 66, said the party needed to recover its unity and clarify its stance in a new platform. He said the Christian Democratic Union had been through a “severe defeat” but that “we have not lost our confidence in ourselves.”

Merz said the CDU would position itself not just as opposition but as “the government of tomorrow.”

The Christian Democrats have been a pillar of Germany’s post-World War II constitutional democracy, supplying chancellors Konrad Adenauer, who led the country into NATO, Helmut Kohl, the architect of German reunification in 1990, and Merkel, the country’s first woman leader.

Merz has experience of being an opposition leader. He led the center-right group in parliament from 2000 to 2002, when Merkel pushed him out of that job. He left parliament in 2009, later practicing as a lawyer and heading the supervisory board of investment manager BlackRock’s German branch.