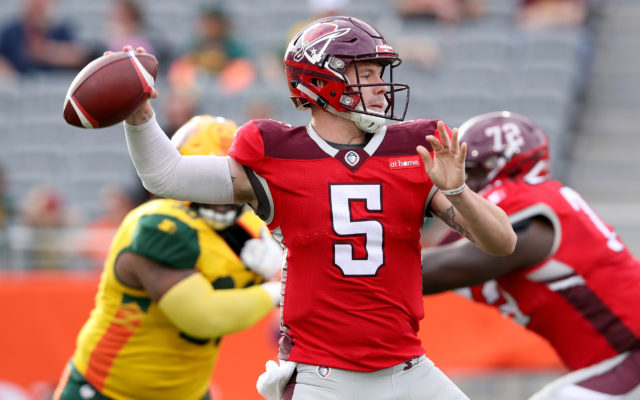 By Cole Thompson / The Alliance

TEMPE — Derron Smith has always been quiet. He’d rather let his on the field skills do the talking. And while the former Cincinnati Bengals safety might not be a household name in The Alliance of American Football, he’s someone NFL teams probably would like to know more about.

Through four games this season, Smith had been one of, if not the, top defensive back in The Alliance. Pro Football Focus graded him out at 90.8 overall through Week 4. (The next-highest safety, Atlanta’s Ed Reynolds, is an 81.2.)

And then came Sunday night.

Excelling both in coverage and against the run, Smith was one of the stars of San Antonio’s 29-25 road victory against the Arizona Hotshots.

The San Antonio Commanders return home from a four-game road trip on Saturday, March 23, to host the Salt Lake Stallions at 8 p.m. ET (7 p.m. local) in a game televised on NFL Network. For tickets to that and all Commanders games, click here.

“Anytime you can get a big play on defense, offense or special teams, that does a good job of setting the tempo for the game,” Smith said after the game. “The offense was able to come out on their opening drive and make a big play. We were able to set the tone early in the game.”

Smith finished with two total tackles along with two pass deflections. But it was his ability to cause turnovers that really made him a star in the desert. On the Hotshots’ opening drive, Arizona quarterback John Wolford felt pressure from Commanders’ pass rush and threw into coverage. Smith was in the right place for the interception and return it 66 yards of the Commanders’ first pick six.

The former Fresno State defensive back would later collect his second interception on a pass deflected off the hands of Hotshots receiver Freddie Martino.

“The quarterback was rolling out (toward) me and one the things they teach quarterbacks not to do is throw the ball late across your body,” Smith said of the interception he returned for a touchdown. “He was trying to make a play, I saw it and I was able to make a play and jump it.”

The Commanders defense looked dominant in coverage after struggling to make plays in recent weeks. Looking to help make the Commanders the team to beat in the Western Conference, San Antonio finished with five turnovers, including three total interceptions.

And while De’Vante Bausby and Orion Stewart continued to look strong in coverage, Smith’s early success set the tone for the remainder of the defense to follow.

“I think Derron has tremendous football instincts,” Commanders head coach Mike Riley said after the game. “He sees things earlier than most people do. He’s got great playmaking skills.”

As the Commanders leave Arizona holding their heads high, their battle is not over yet. With one more stop on their four-game road trip, they will next an Atlanta Legends squad looking to extend a two-game winning streak thanks to the likes of new starting quarterback Aaron Murray.

He’ll likely have to get by Smith, who is eager and ready to make San Antonio’s defense the top unit in The Alliance.

“It’s nice to be able to receive some recognition but there’s still obviously some things I need to do in order to get better,” Smith said. “I’m just trying to help my team the best way I can and do whatever it takes to help us get W’s.”

Cole Thompson covers the San Antonio Commanders for The Alliance of American Football. Follow him on Twitter @MrColeThompson.