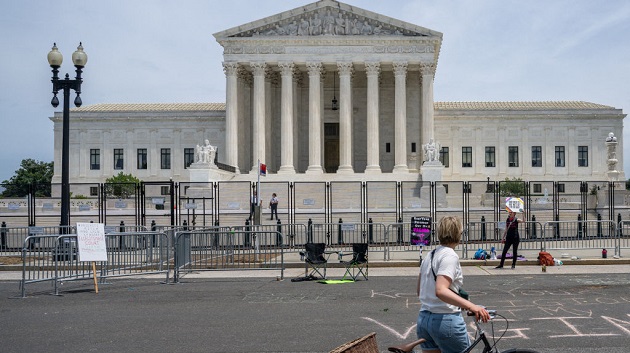 (WASHINGTON) — The Supreme Court ruled Tuesday that the state of Maine must allow parents who receive taxpayer-funded tuition assistance payments to use them at religious schools, saying a ban on the practice had violated the First Amendment.

The decision is a significant expansion of religious liberty and opens the door for wider use of taxpayer funds for sectarian education.

“The State pays tuition for certain students at private schools — so long as the schools are not religious. That is discrimination against religion,” Chief Justice John Roberts wrote in the majority opinion joined by the court’s five other conservatives.

“The Court continues to dismantle the wall of separation between church and state that the Framers fought to build,” Sotomayor wrote.

Half of Maine’s school districts — mostly in rural and sparsely populated areas of the state — do not operate their own public schools. Instead, they either contract with a neighboring district to provide public education for residents, or they provide parents with tuition assistance payments to use at a private school of their choice. About 5,000 students currently use the assistance to attend private schools.

State regulations have prohibited use of the funds at a school that promotes a specific faith or belief system and teaches academic material through a “lens of faith.”

A pair of families who want to send their children to religiously-affiliated private schools using the program sued the state alleging discrimination under the First Amendment. Two lower federal courts sided with the state, saying that the program was rightly restricted because of the First Amendment’s Establishment Clause, which prohibits government establishment of religion.

“A neutral benefit program in which public funds flow to religious organizations through the independent choices of private benefit recipients does not offend the Establishment Clause,” Roberts writes. “Maine’s decision to continue excluding religious schools from its tuition assistance program …thus promotes stricter separation of church and state than the Federal Constitution requires.”

Chief Justice Roberts noted that Maine is not required outright to fund religious schools, but that once it allows general subsidy of private education it could not discriminate. “The State retains a number of options: it could expand the reach of its public school system, increase the availability of transportation, provide some combination of tutoring, remote learning, and partial attendance, or even operate boarding schools of its own,” he wrote.

In dissent, Justice Stephen Breyer argued that the Constitution gives the states some leeway to choose how scrupulous they want to be in keeping taxpayer dollars away from religious use.

“That need is reinforced by the fact that we are today a Nation of more than 330 million people who ascribe to over 100 different religions. In that context, state neutrality with respect to religion is particularly important,” Breyer wrote.

“Today, the Court leads us to a place where separation of church and state becomes a constitutional violation,” she writes. “If a State cannot offer subsidies to its citizens without being required to fund religious exercise, any State that values its historic anti-establishment interests more than this Court does will have to curtail the support it offers to its citizens.”

Advocates for the Maine families challenging the program celebrated the court’s decision.

“We are thrilled that the Court affirmed once again that religious discrimination will not be tolerated in this country,” said First Liberty president and chief counsel Kelly Shackelford. “Parents in Maine, and all over the country, can now choose the best education for their kids without fearing retribution from the government.”

Rachel Laser, president of Americans United for Separation of Church and State, said the justices were infringing on the rights of those who believe the government must remain neutral in matters of religion.