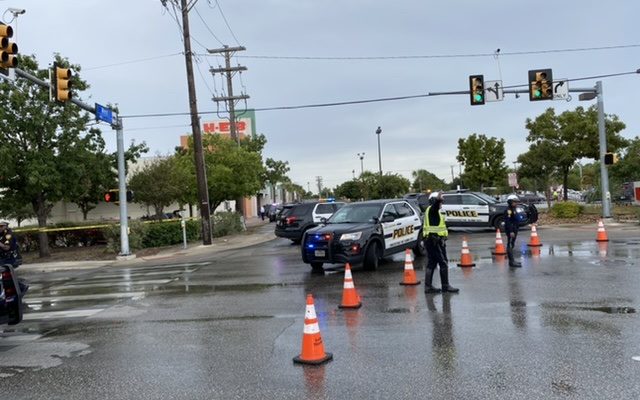 San Antonio police released more details Saturday afternoon about the officer-involved shooting at the H-E-B the day before.

Police say one of its officers, a loss prevention officer, and an off-duty Floresville police officer escorting the suspect out of the store.

When they got to the San Antonio police officer’s car, the 61-year-old suspect began looking into his backpack and going through his pockets.  The officer told the man to put the items from his pocket into the backpack.

Police say the man did that and then moved to one side of the police car.

The officer told the man to get back to the front of the car, but he refused.  Instead, police say the man moved toward the officer and said that he would not “go to jail.”

The suspect then lunged at the police officer and stabbed him in the face with a knife.  He then put the officer in a chokehold while trying to slit his throat.  The man used the knife to stab into the officer’s chest, but the weapon wasn’t able to get through the officer’s protective vest.

H-E-B employee Michael Rios and the Floresville officer, Roland Casillas, rushed in to help the officer.

Police say the man used Rogers as a shield while dragging him backwards away from Rios and Casillas.

When the other two tried to jump in and help, the man stabbed Rios in the head.

Rogers was able to break free from the suspect’s grip and he, Rios, and Casillas were able to create some distance between themselves and the man.

The man then told the trio that he was not going to jail and advanced toward the three.

Rios and Casillas both shot the man, which ended the attack.

The man, not yet identified, died in the shooting.  Rios and Rogers were taken to a hospital to be treated for their stab wounds.  Both are expected to fully recover.

Police say they believe the suspect was wanted for an outstanding aggravated assault warrant.

SAN ANTONIO (KTSA News) – A shoplifting suspect is dead and a San Antonio police officer is hospitalized after being stabbed in the face outside  a Northwest Side H-E-B store.
Chief  William McManus says SAPD was called to the store on Fredericksburg Road at Hildebrand around 2:30 this afternoon for a shoplifting incident.
An off-duty Floresville police officer working security at the store and a San Antonio police officer apprehended the suspect and took him to the parking lot. McManus says video footage shows  the man going through a backpack on the hood of a patrol car.  He went out of the view of the dash cam and came back into view with a knife and stabbed the SAPD officer.  Both officers opened fire.

H-E-B spokeswoman Dya Campos says the store will remain closed until 6 A.M. as the investigation continues. Campos said a team member was taken to a hospital as a precautionary measure after a scuffle.