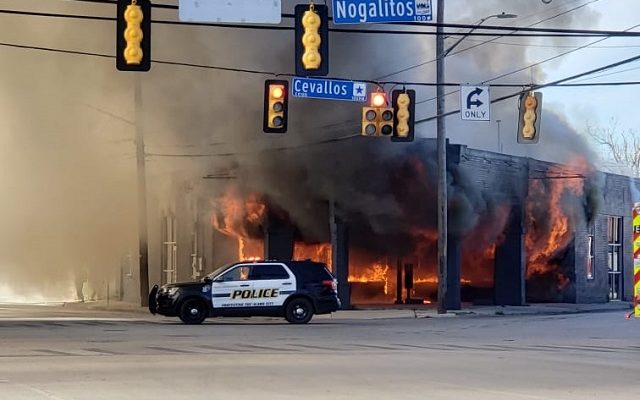 UPDATE:  SAN ANTONIO (KTSA News) – Smoke could be seen for miles when fire swept through a an office building just south of downtown San Antonio around 10 this morning.   The massive two-alarm blaze started around 10 this morning on South Flores at Cevallos street in the trendy Southtown area.

“It appears the fire started outside in an area between two buildings where old cars and other things were being stored,” said Joe Arrington with the San Antonio Fire Department.

The flames quickly engulfed the triangular-shaped Sweb building, which housed a web design company.  That structure was destroyed and the other building was heavily damaged.   It took a couple of hours to put out the fire at the Sweb building .   It kept flaring up with stubborn flames shooting through the roof.  Arrington told KTSA News that  the old building, which had been restored, had several layers of roofing that kept burning.

Arson investigators are looking into the cause of the fire, but Arrington says it’s too early to say whether it was intentionally set.  Several area businesses were closed because the power was out.

SAN ANTONIO (KTSA News) – About 100 firefighters are battling a two-alarm blaze in the Southtown area.   It started around 10 this morning in the area of Nogalitos near Cevallos. “South Flores Street also is affected by the fire.  Thick, black smoke is billowing over the area.    Marty Gonzalez posted this photo on her Facebook page.