San Antonio officer who lost leg in crash urges drivers to ‘Move Over, Slow Down’ 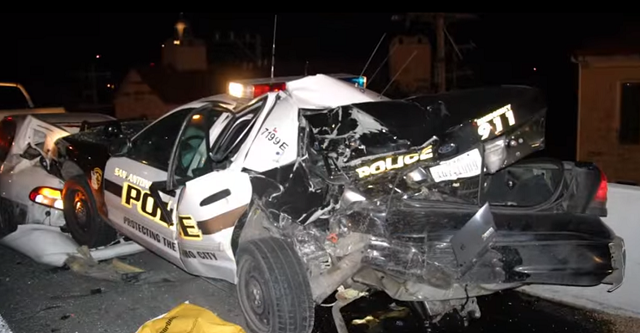 SAPD Officer Michael Thornton, who lost his right leg when he was hit by a drunk driver is urging motorists to 'move over, slow down.'/Photo-SAPD

SAN ANTONIO (KTSA News) -A San Antonio police officer who lost his right leg when he was hit by a drunk driver and left dangling from a downtown freeway is warning motorists to ‘Move Over and Slow Down.’ It’s the law in Texas.

Nine years ago, officer Michael Thornton stopped to help some people change a tire on IH 35 near the Laredo Street exit downtown. It was around 2:30 in the morning and they had just finished changing the tire when he was hit.

“I heard the screeching brakes, looked up and saw a black  Dodge Ram coming up the back of my police car about 80 miles an hour,” said Thornton.

The truck crashed into the cruiser, at one point pinning Thornton between the bumpers and severing his right leg below the knee.

“I was able to swing myself over and grab onto the concrete railing,” said Thornton.

He was left dangling from the highway until the group he had been helping pulled him up and kept him from falling about 35 feet onto the pavement below.

“They came over and grabbed me by my gun belt and dragged me back over  and that’s when I saw -‘oh, there’s my leg, it’s laid out in the middle of IH 35,'” said officer Thornton.

He’s urging  drivers to move over and slow down when they see emergency vehicles on the side of the road.  The Texas Move Over/Slow Down law requires drivers to move one lane over, if possible, when approaching an emergency vehicle parked on the shoulder with warning lights in operation.  If moving over isn’t possible, drivers must slow down to at least 20 miles per hour below the posted speed limit.  The law also includes utility and TxDOT vehicles.

The driver who struck Thornton’s patrol car and severed the officer’s leg was convicted of intoxication assault of a public servant and sentenced to 16 years behind bars.

Thornton is an Iraq combat veteran who received a Purple Heart after a roadside blast.  He also has been  awarded SAPD’s purple heart medal.    Thornton uses a prosthetic leg and works in SAPD’s SAFFE (San Antonio Fear Free Environment) Unit at the Prue Road substation.