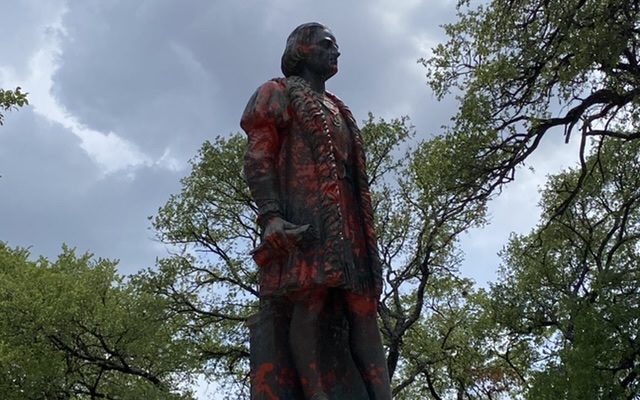 SAN ANTONIO (KTSA News) – The Christopher Columbus statue in downtown San Antonio has been vandalized two days before a protest is scheduled to take place at the site of the sculpture.  A park police officer on patrol around 4:30 Thursday morning discovered that red paint had been splashed on the statue.

“This is one of the reasons we were working with city council– to avoid something like this occurring,” said Paolo Cristadoro with the Christopher Columbus Italian Society of San Antonio.

A few hours after the vandalism was discovered, several area residents showed up at the San Antonio City Council meeting and urged members to have the statue removed and change the name of Columbus Park.  Councilman Robert Trevino, who was pushing forward a plan to remove the sculpture and return it to the Italian Society, scolded his colleagues for delaying his proposal. He filed a Request for  Council Consideration last week, but it won’t go to a committee until Tuesday.

“We had an opportunity to take action to ensure that it be removed and returned safely, and also answer the request of our community who had been asking for change and its removal–action that was delayed,” said Trevino.  “We have an opportunity to change the name of the park and replace the statue with a new piece that would better  represent our Italian community.”

Trevino is asking that the statue be removed pending city council approval.

The statue,which was made in Italy, was donated by the Italian Society to the city of San Antonio in 1957.  It overlooks Columbus Park on West Martin near IH 35, which would be renamed Piazza Italia, if the plan gets the final okay.

Cristadoro told KTSA News it was troubling to see red paint splattered on the statue.

“It hurts, but we kind of anticipated it happening,” he said.

“Its been vandalized before.  It was a lot worse with a lot of slogans back in October,” said Cristadoro.

A protest is scheduled  in front of the Christopher Columbus Statue from noon until 2 pm Saturday.   Cristadoro has been told by the organizer that it will be a peaceful protest, but he’s concerned that other groups and anti-protesters may show up.