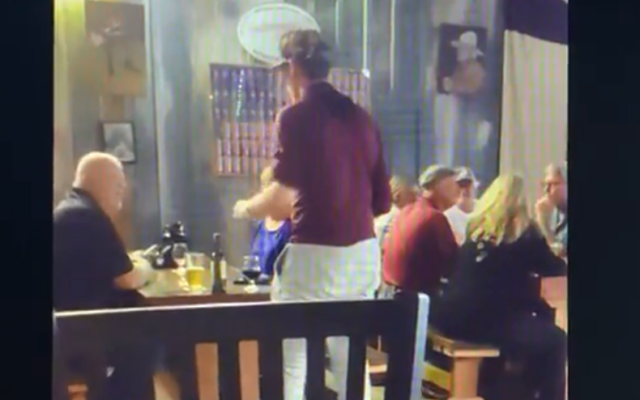 Screenshot from video posted by KTBC-TV

SAN ANTONIO (KTSA News) — A Hays County Commissioner was reportedly caught on camera urinating in public on New Year’s Eve and says he was not intoxicated at the time of filming.

According to KTBC-TV, Hays County Commissioner Walt Smith was filmed walking unsteadily from the inside of a beer and wine bar in Dripping Springs out to the parking lot where he urinated behind the open door of a parked truck before driving off — but not before allegedly popping the curb on his way out. He said he went to his office, which is a block away from the bar.

A portion of the video was posted on Twitter.

HaysCo Commissioner Walt Smith caught on camera urinating in public a few moments after recorded in a Dripping Springs Beer&Wine bar appearing unsteady-Smith admits making wrong decision. Claims was not intoxicated but impaired by medication he was taking @fox7austin pic.twitter.com/h3KawONQeY

The video was provided to KTBC-TV by the witness and asked the station to not be identified publicly out of fear of retaliation.

KTBC-TV spoke with Smith this week where he explained that he was not drunk, but was impaired because of a medication he is prescribed. He reportedly did not know the video existed until this week.

Smith shared that he is taking the brain tumor medication cabergoline which can cause side effects like nausea, vomiting, dizziness, tiredness, and lightheadedness, and said he has since had the dosage reduced because of how severe the symptoms have been affecting him.

“I probably should not have gotten behind the wheel,” the commissioner told KTBC-TV. “But again, I need to. At the time, I thought my vigilance was good when it came to what the side effects of the medication were. But since that time, I’ve had to go through a re-evaluation of it.”

The witness told KTBC-TV they did not call the police at the time of the incident because they believed he would be gone by the time they arrived. No criminal charges have been filed.

“Here is a guy urinating in the streets that he maintains, in daylight, on the main downtown district of Dripping Springs,” the witness reportedly told KTBC-TV. “He is 20 feet from the bathroom of the establishment he just left. His actions are concerning, yet I am confident that he would be home by the time police were notified this even happened. He lives just a mile or two down the road.”

Smith is running for a second term as county commissioner and is facing one challenger in the GOP Primary election. Early voting began on Monday.