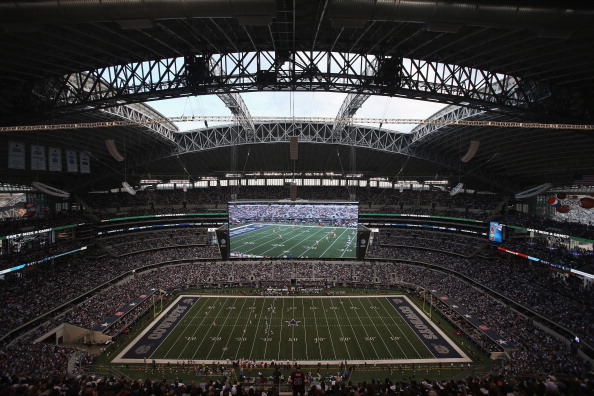 ARLINGTON, TX - NOVEMBER 22: A general view of play during a Thanksgiving Day game between the Washington Redskins and the Dallas Cowboys at Cowboys Stadium on November 22, 2012 in Arlington, Texas. (Photo by Ronald Martinez/Getty Images)

SAN ANTONIO (KTSA News) — It may seem like the Dallas Cowboys are always playing a football game on Thanksgiving Day, and this is because they are one of two NFL football teams positioned to host a game annually on the holiday.

The Detroit Lions also host a game each year, and let’s give credit where credit is due: The Lions started the tradition of NFL football on Thanksgiving back in 1934, and the first game resulted in a capacity crowd at what was then University of Detroit Stadium. Detroit lost to the Chicago Bears that day, but a tradition was born nonetheless.

Fast forward more than 30 years, and the NFL was then a growing entity with expansion happening across the country. The Dallas Cowboys, born in 1960, had made it through several losing seasons under inaugural head coach Tom Landry. But by 1966, the team was becoming a contender for an NFL championship, and president and general manger Tex Schramm tossed his team in the ring as hosts for a second football game on Thanksgiving that same year.

Despite the fact it would be another decade before the Cowboys acquired the nickname, ‘America’s Team,’ the exposure the Dallas franchise got on a day in which millions of families across the nation were gathered for the holiday was immense. Also consider that the NFL was almost a shell of what it is today, a much smaller league with all of 15 teams at the time. There was no NFL franchise in Florida, North Carolina, Denver, Arizona or Washington. In fact, the Cowboys were the southernmost franchise in the league in 1966, and if not for the Los Angeles Rams and San Francisco 49ers, Dallas would have also been the westernmost team in the NFL.

Yes, the American Football League had other franchises in parts of the country void of NFL franchises, but this league never garnered the interest the NFL did. By 1970, the NFL and the AFL merged to form the NFL we know it today, albeit with still fewer teams.

Schramm was never one to pass on an opportunity to display his young franchise to the nation and the world. What started off as a somewhat risky idea to play a second game on Thanksgiving Day became a huge television draw hosted annually by one team that would appear in five Super Bowls in the 1970s.

In fact, by the early 1970s other NFL owners started complaining about the Cowboys – not the Lions – always hosting a game on Thanksgiving Day. In 1975 and 1977, the NFL awarded Thanksgiving Day football games to the St. Louis Cardinals, obviously not quite aware of the fact that the Cowboys were becoming the most popular football team in the country. After the Cardinals lost both of their games on Turkey Day, the experiment was over.

Thanksgiving games for the Cowboys have created all kinds of memories, both good and bad. There was then-backup quarterback Jason Garrett’s incredible come-from-behind win over the Green Bay Packers while filling in for starter Troy Aikman in 1994. There was also then-rookie wide receiver Randy Moss of the Minnesota Vikings torching the Cowboys in what is still known as a grudge performance against the team he was hoping would draft him in 1998.

Of course there are many others, and the Thanksgiving tradition will continue for the Cowboys this year as America’s Team lines up against the New York Giants in a game that could put Dallas in sole possession of second place in a highly competitive NFC East division in 2022. The Cowboys will be turning back the clock this year by bringing back the same uniform design they wore in that first Thanksgiving Day football game against the Cleveland Browns at the Cotton Bowl in ’66.