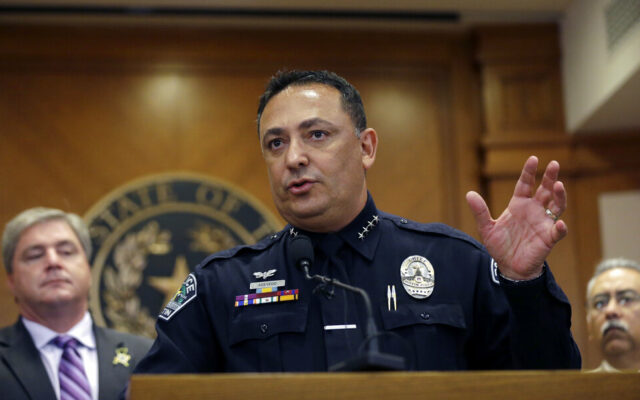 SAN ANTONIO (KTSA News) — The top cop is out of the job in Miami after a little more than six months.

Acevedo served as chief of police in Austin from 2007 to 2016. He was a finalist in the search for the top cop in San Antonio in 2015, but lost when Bill McManus was reappointed to the position. He went to Houston in late 2016 where he served as police chief until he left to Miami earlier this year.

“I think this is like getting the Tom Brady or the Michael Jordan of police chiefs,” Mayor Francis Suarez told the Miami Herald when Art Acevedo was sworn in as chief of police in April.

“Today, I suspended Police Chief Art Acevedo with the intent to terminate his employment, consistent with the City Charter,” Noriega said. “The relationship between the Chief and the organization has become untenable and needed to be resolved promptly. In particular, the relationship between the Chief and the Police Department he leads – as well as with the community – has deteriorated beyond repair. Relationships between employers and employees come down to fit and leadership style and unfortunately, Chief Acevedo is not the right fit for this organization.”

The statement includes eight reasons why Acevedo was fired that includes:

“In my view, there are problems with your leadership of the City of Miami Police Department which have been created and fostered over your twenty-three-week tenure,” Noriega said. “Instead of taking time to first commit yourself to developing and fostering trust both within the department and the community, you were brash and hasty in many of your comments and actions. Many of these problems could have been avoided if you had made the effort to understand and cultivate key relationships and establish trust.”

You can read the full statement here.

The news of Acevedo’s ousting comes on the heels of a public feud with three city commissioners, including former Miami Mayor Joe Carollo, over comments deemed insensitive to Cubans in addition to an eight-page long memo penned by the police chief to the mayor and city manager outlining the ways in which the three commissioners were interfering with internal affairs at MPD.

Acevedo wrote that Carollo reportedly made misleading statements in a September 13 budget reading and claimed the commissioner made the incorrect public statements “to create the false appearance that the MPD and I were somehow insubordinate to the City Manager.”

The memo continues with Acevedo making claims that since his appointment in April he has uncovered a pattern of unlawful use of force by officers and was working with his superiors to create an internal position to help reform the department.

“However, during this Sept. 13 Commissioner meeting, Commissioners Carollo, Reyes, and Diaz de la Portilla manipulated the budget process to hamper my reform by eliminating the funding for the two aforementioned positions, which are critical to any serious reform efforts,” Acevedo wrote.

The commissioners held an investigation led by Carollo into Acevedo on Sept. 27.

“This guy comes from the outside and all of a sudden says, ‘Hey, I know better than all of you. I’m the great reformer,’ ” Carollo said. “Mr. Acevedo thought he would intimidate me or some of us and [we would] bow down to him so he could do whatever he pleases here.”

Miami commissioner Ken Russell, not named in Acevedo’s memo opted to not show for the meeting over the possible legal controversies, according to a statement.

“In light of the memo that Chief Acevedo sent to the Miami City Manager and Mayor on September 24th, I had several concerns. During discussions with the City Manager, City Clerk, and City Attorney this past weekend, I expressed my concern that public discussion regarding the accusations, or counter accusations that might be made against Chief Acevedo, would only serve to put the City of Miami at legal risk,” Russell wrote. “With all due respect to three of my fellow Commissioners and their understandable interest in addressing the accusations made against them, I do not believe today’s special meeting should have taken place and I did not attend. I do believe that these accusations should be investigated and support that process moving forward.”

The next day, Mayor Suarez announced that he was deferring to Noriega to make the decisions about Acevedo’s future in Miami.