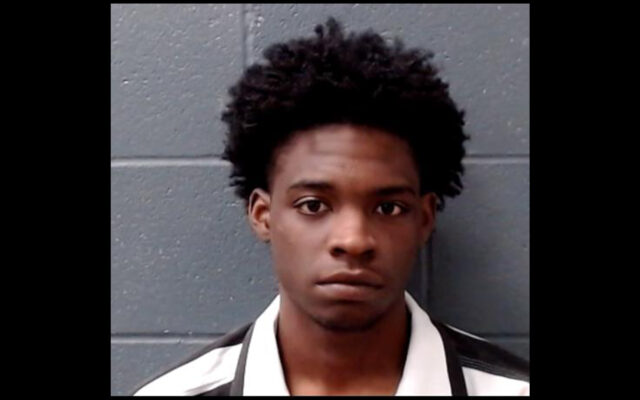 BEXAR COUNTY (KTSA News) — A New Braunfels man was arrested Monday night after a series of robberies and a short pursuit with police.

New Braunfels police say the first reported robbery happened in the parking lot of H-E-B Plus on the corner of Interstate 35 and FM 306 at around 7:15 p.m. Monday.  Police say the crook — later identified as 21-year-old Thomas Woodard — pointed a gun at a man and demanded his wallet.

Woodard then tried the same ploy at a shopping center on the corner of Interstate 35 and FM 725.  He pointed a gun at another man there, demanded the wallet, but the man declined.  Woodard drove away without the loot.

Using information from the victims, police were able to find Woodard in his white Honda Accord on the Interstate 35 northbound frontage road near Buc-ee’s at FM 306.

Woodard refused to stop for the New Braunfels police officers who had tracked him down.  He turned left onto FM 306 with police on his tail.

The pursuit did not last long as Woodard drove off the roadway near the railroad overpass and Goodwin Lane — briefly going airborne.

The short flight and ensuing crash left his car disabled and Woodard in the hands of police.

After being taken to an area hospital to be evaluated for the crash, Woodard tried escaping the hospital, but was stopped by officers.  The alleged crook continued to fight with officers in an effort to break free — but lost that effort.

Police also determined Woodard tried robbing another man at the Creekside Shopping Center on FM 306 before going to H-E-B.  The victim there also declined to hand over his wallet despite the thief pulling out his gun.

Woodard has been charged with three counts of aggravated robbery, evading arrest in a vehicle, unlawfully carrying a weapon, escape from custody, and resisting transport.