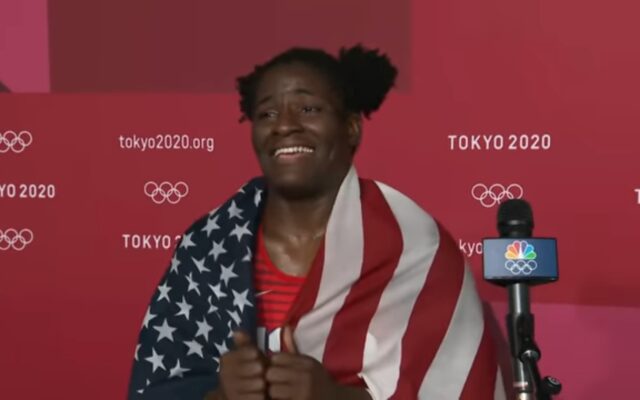 SAN ANTONIO (KTSA News) — She began wrestling while she was in the 10th grade and now, Tamyra Mensah-Stock from Katy, Texas is an Olympic Gold Medalist.

Mensa-Stock won the gold when she defeated Nigeria’s Blessing Oborududu in the 68kg (152 lb) final.

With the win, she also becomes the first African-American female Olympic gold medalist in the sport of wrestling.

But it’s not the video of her match that’s going viral, it’s her post-win interview.

Mensa-Stock was asked about her ride to Olympic gold.

” I knew I could do it when I first started wrestling. I felt that I could be an Olympic champ, so I kept going….I DID IT!”

She says she looks forward to being a role model to young girls in the future.

“Just because you’re a female it doesn’t mean you can’t accomplish the BIGGEST goals.”

Her win also comes with some money, she says she is going to use it to help her mom live out her dream.

At the end of her interview, the champion wrestler was draped in an American flag and the interviewer asked how it feels to represent her country.

“It feels amazing. I love representing the U.S. I freaking love living there, I love it and I’s so happy that I get to represent U.S.A.!”