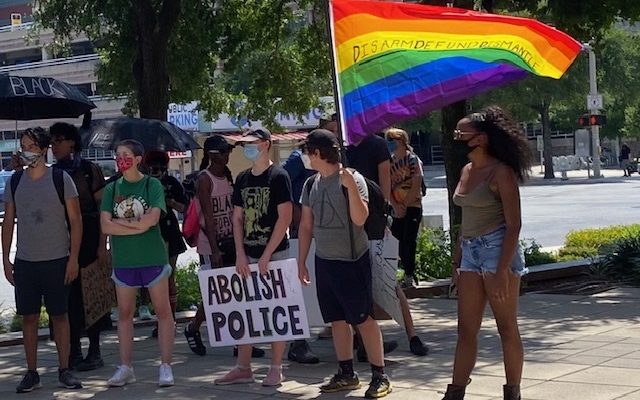 SAN ANTONIO (KTSA News) -The crowd on day 11 of the protests in San Antonio that were triggered by the death of George Floyd wasn’t nearly as large as Monday’s rallies and demonstrations, which were organized by the group called Young Ambitious Activists.

Unlike Monday’s  gathering, which included a San Antonio police officer as one of the speakers, Tuesday’s protest was anti-police with a focus on the deaths of three Black men killed by San Antonio officers. The crowd demanded that Bexar County District Attorney Joe Gonzales reopen the cases against the officers involved in the deaths of Charles Roundtree, Marquise Jones and Antronie Scott. The officers were not indicted.

“He (Gonzales) has no plans to reopen these cases, so today we are here to show him that the court of public opinion matters,” said organizer Kimiya Factory.

Eighteen-year-old Charles Roundtree was shot and killed by a police officer who was responding to a complaint at a house where Roundtree and Davante Snowden were staying.  The officer thought Snowden was reaching for a gun when he fired at Snowden, but the bullet fatally struck Roundtree.

Twenty-three-year-old Marquise Jones was shot and killed by a police officer working security at a Northeast Side restaurant in 2014.  The officer said Jones started running after a crash at the drive-thru and pointed a gun at him, so he opened fire, killing Jones.

Thirty-six-year-old Antronie Scott was shot and killed in 2016 by a San Antonio police officer who through he was holding a gun. It turned out to be a cell phone.

Several times during the protest, the crowd turned to face officers who were providing security outside the courthouse and started chanting “No justice no peace, no racist  police,” and “Police are violent, we won’t be silent.”

Eighteen-year-old Griffin Mosqueda held a sign that read “Abolish Police.  His older brother, Jackson held a flag  with the words, “Disarm, Defund, Dismantle.”  They’ve participated in several protests since they began in San Antonio May 30.

“I think it’s part of my civic duty and I am privileged, as a White man,  to not have to deal with the issues that I’m protesting,” said Griffin.

He supports abolishing police departments to end systemic racism. Griffin says it would be a gradual process.

“You would have social workers and traffic patrols designed to address specific problems like domestic violence,” he said.

During the closing rally, Factory got into an argument with Ervin Lee, who showed up with his sound system, as he has for other demonstrations.   She accused him of providing police with inside information about Black Lives Matter events.  Factory also told KTSA News to stop videotaping  the heated exchange, and other protesters jumped in with umbrellas and posters to block the camera.

Lee, who recently started a group called “The People’s Rep,”  later told KTSA News that he doesn’t believe all police officers are bad, and that didn’t go over well with the other protesters outside the courthouse Tuesday.

“We’re just not anti-police,” said Lee. “We have an open dialogue to deal with the problems that directly affect the community.”

He said many in the crowd didn’t like the fact that he talks to police.

“They’re still human and I have people in my family who are police officers,” he said. “I believe that you judge a man by his heart.”

The crowd started with a couple of dozen people, but grew to more than a hundred by the time they marched to Travis Park, the Alamo, the River Walk, La Villita and back to the Courthouse.

At the closing rally, Ervin Lee with The People’s Rep showed up with his sound system, which he has provided for other demonstrations and protests since they began last Saturday.   Factory told him to leave, accusing him of being friends with police officers and providing them information on the group’s plans.

An argument erupted between the leader of Tuesday’s protest outside the Bexar County Courthouse and one of the participants who told KTSA News he’s not anti-police. Other protesters covered my view with umbrellas and posters. @ktsanews #KimiyaFactory #ErvinLee pic.twitter.com/dRaTzUSMZ2