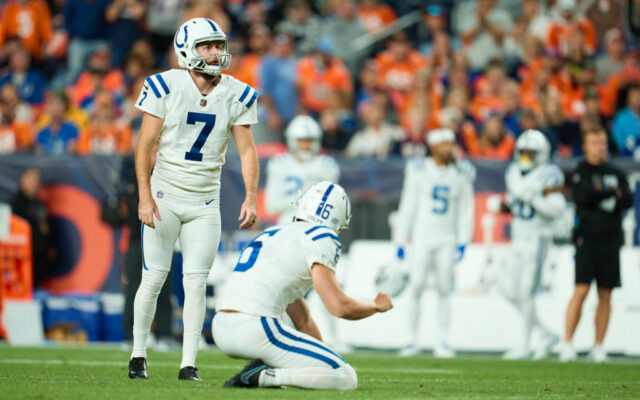 DENVER, CO - OCTOBER 06: Chase McLaughlin #7 of the Indianapolis Colts kicks a field goal against the Denver Broncos at Empower Field at Mile High on October 6, 2022 in Denver, Colorado. (Photo by Cooper Neill/Getty Images)

SAN ANTONIO (KTSA News) — A Denver TV station apologized to its viewers after the game for the underwhelming game between the Denver Broncos and Indianapolis Colts it aired.

KMGH-TV was the over-the-air station to bring the Prime Video broadcast of Thursday Night Football to the local Denver audience.

After the game, sports reporters Troy Renck and Nick Rothschild apologized for what people had to watch on their station.

“Troy, I just feel the need to apologize to the viewers,” Rothschild said while the two stood in the corridor of Empower Field at Mile High. “I know we didn’t play, we didn’t even run this broadcast, but the fact you had to watch that on our air, I feel bad.  I was here and I didn’t even want to watch it.”

The game went to overtime as a 9-9 tie with neither team scoring a touchdown.  Fans were seen leaving the game in the final minutes of the fourth quarter, despite it being a close game.  The Colts eventually won with an overtime field goal, the seventh made by both teams.