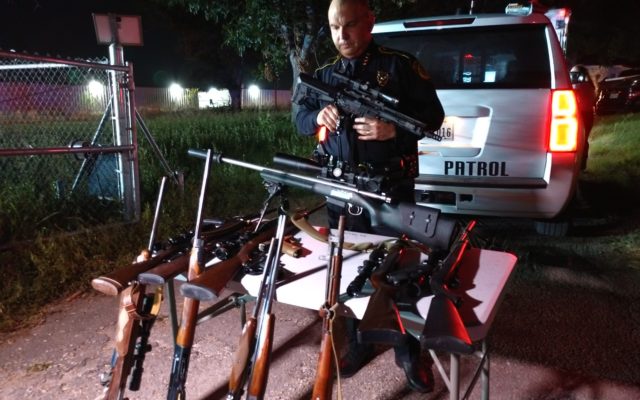 Bexar County sheriff Javier Salazar showcases the weapons stash found at a meth lab in the northeastern part of the county on August 7, 2019. (Photo: KTSA/Dennis Foley)

The Bexar County Sheriff’s Office says it has arrested and charged 35-year-old Cody Webb and his wife 34-year-old Carol Webb on drug and child endangerment charges.

The office updated the volume of drugs uncovered to roughly 9 pounds of meth, with a street value of $204,100.

Bexar County sheriff Javier Salazar said his deputies came to a home on East Evans Road, just yards away from Veterans Memorial High School, at around 6 p.m. on a tip that meth was being produced inside the home.

Salazar said the odor of the lab was apparent just by stepping on the property.

Inside the home, deputies and federal agents found eight pounds of methamphetamine and plenty of material to produce even more.

The sheriff said that is commercial level production.

On top of that, deputies found an entire stash of high powered weapons inside the house and five to ten pounds of the explosive Tannerite on the front porch.

“The most heartbreaking thing is that there was a 5-year-old boy living here among the meth lab,” Salazar told reporters Wednesday night.

Deputies arrested the boy’s parents, a man in his mid 30s and a woman in her early 30s.  They are expected to face a variety of drug and child endangerment charges.  Salazar said there could be weapons charges as well, depending on whether they were permitted to have them.

Along with the sheer criminal activity done by the couple, the sheriff said they ruined a historic property.

“This house is actually designated as a historic building,” stated Salazar.  “It was built in the 1840s.  There’s a historical plaque in the front of the building.  It’s a beautiful home by all accounts.  Now, it’s pretty much rendered useless by the fact they were manufacturing methamphetamine here.”

The house is more or less condemned now.

Salazar said the home appears to have been passed down through the suspects’ family for generations, possibly dating back to its construction in the 1840s.