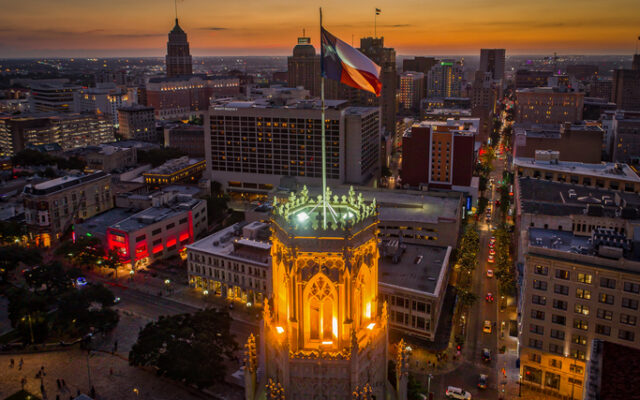 Aerial photo taken over a building with a Texas Flag in downtown San Antonio, Texas during sunset.

The total budget amounts to $3.4 billion.

The budget includes what the city said amounts to $95 million in property tax relief in the forms of a tax rate cut and boosted homestead exemptions.

From the $50 million, $7.5 million will go into the Residential Energy Assistance Partnership (REAP) with most, $5.5 million, going toward immediate relief for eligible customers.

The other $42.5 million will be delivered back to customers as direct credits on November or December bills.

“I am extremely proud of the City team who provide quality customer service to our residents and am glad to be investing in the recruitment and retention of this team,” said San Antonio city manager Erik Walsh. “The budget is balanced and will enhance the services our residents expect, while also giving money back to them through direct property tax relief and energy credits.”

Along with relief to taxpayers and CPS Energy customers, the city is increasing spending in a wide range of areas.

City employees will be getting raises, with the base entry wage rising to $17.50 per hour.  All civilian employees will be seeing a five percent increase in pay while some positions will see an at least two percent market rate adjustment in pay.

Roughly $154 million dollars will go toward infrastructure maintenance.  About $116 million will go into streets, $21 million into sidewalks, $2 million into alleys, and $3 million in new traffic signals.

The city will be spending $136 million in 2,500 new affordable housing units, roughly $8 million in parks and recreation improvements, and nearly $5 million into the library system.

The San Antonio Police Department will be adding 78 new police officer positions and an extra $5 million in funding.

“This budget sustains a vast array of City services while providing the most fiscal relief for residents in recent history, including a property tax rate reduction and expanded property exemptions for homeowners,” San Antonio mayor Ron Nirenberg said in a statement.