This is Texas Freedom Force leads rally for Councilman Perry 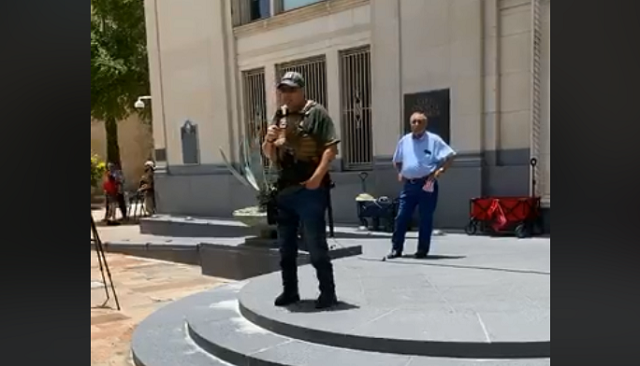 SAN ANTONIO (KTSA News) – On the eve of the Fourth of July weekend, This is Texas Freedom Force led a “Stand up, Don’t bow down” rally in support of a San Antonio councilman who’s been the target of protests in his North Side neighborhood.

Members of Reliable Revolutionaries have been marching through the streets of District 10 Councilman Clayton Perry’s neighborhood, calling for his resignation.  Perry drew the ire of Black Lives Matter activists during a council meeting last month when he was the only council member who did not raise his fist or take a knew during a moment of silence for black men killed by police.   They also accused him of sleeping and disrespecting them when they were speaking, allegations which Perry denies.

A few dozen people, several of them fully armed, gathered at Main Plaza plaza outside the empty City Council chambers Thursday afternoon to voice their support for Perry.  He was not there, but those at the rally called on Perry not to give in to the protesters. 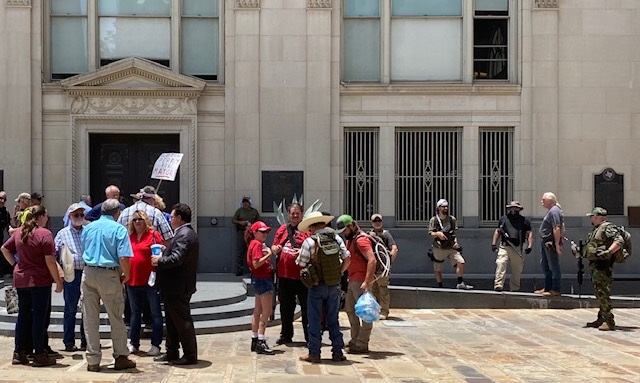 “I’ve been thrown out of this building three times,” said Brandon Burkhart, president of TTFF.

He accused the council of having a double standard because members of his organization have been removed from the council chambers for speaking out of turn, while other groups have been allowed to disrupt or, as he put it, “hijack” the meetings.

Conservative blogger and commentator George Rodriguez  said,”If you reward bad behavior, you get more bad behavior. We are excusing, rewarding and justifying bad behavior, so what do you think we’re going to get?”

And about the defund the police movement, Rodriguez said if the Black Lives Matter activists don’t want police in their neighborhoods, “send them to mine.”  Rodriguez said he’d rather send his tax money to the San Antonio Police Department instead of wasteful projects.

Republican Weston  Martinez said San Antonio needs more council members like Perry who will fight for fiscal responsibility,   He said poor people are taxed the most.

“It’s time to return law and order to the Alamo city.  We’ve got no problem fighting tyrants from outside or within, but I promise you this, we are going to make sure that we stand up with one voice and a unified front that’s going to allow us the ability to defend our right to life, liberty and the pursuit of happiness,” said Martinez.

Burkhart noted that he’s had plenty of arguments with councilman Roberto Trevino and Mayor Ron Nirenberg concerning the Cenotaph and the master plan for the Alamo, but “we’ve never gone to their houses to try to intimidate them.”

He called on Nirenberg to stop the protesters from going to Perry’s house or “we’re coming to your house.”

37 mins ago
Connect With Us Listen To Us On