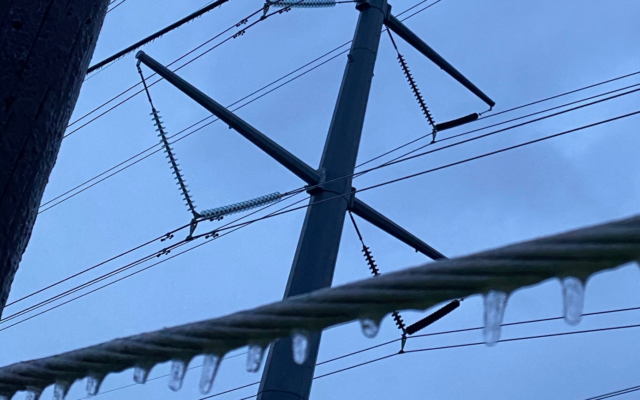 SAN ANTONIO (KTSA News) — The City of San Antonio is continuing to respond to the freeze that has settled over much of Texas including below freezing temperatures, gusting winds and frozen — or soon to be — precipitation.

During a press conference Thursday afternoon, CPS Energy Interim CEO Rudy Garza said that approximately 98,000 customers reportedly were out of power and that total includes those who experienced a “blip” of an outage.

Of that nearly six digit figure, 37,000 experienced sustained outages. Most of those, Garza said, should be resolved by midnight and reported that 5,466 customers remained without power at 5 p.m.

“I just want to reiterate that our linemen are some of the best in the business and they have really gotten after it today under some really difficult circumstances,” Garza said, noting that CPS Energy crews resolved 32,000 outages in a 12-hour period.

All of the outages were related to the weather, including ice accumulation on the wires and trees which caused trees and branches to fall on power lines.

“This is not a failure of our system, our powerplants have been fine,” Garza said. “I’m not sure we’ve had one direct equipment related outage. Our substations have been operational [and] transmission system has been good. This is really a weather driven event.”

“I’m not anticipating the kind of impact tomorrow that we saw today,” Garza said.

Garza acknowledged there are infrastructure upgrades that could be utilized to promote more efficiency at CPS Energy, but the plans are hamstringed by a lack of funding. These possible upgrades include more underground infrastructure.

“Every year, we look for opportunities to look at our reliability data and pick, maybe, a neighborhood or a line section that we can underground where we believe that underground will have a positive impact on reliability,” Garza said. “We were spending probably $10 [to] $20 million a year on strategic undergrounding. … I’d love to find more dollars to do that, but we’re working within the budget that we can commit to that.”

SAWS CEO Robert Puente reported that “it’s business as usual” for the water system. He said the biggest issue homeowners may encounter with their water will be related to individual homeowners pipes.

SAWS offers tips on preparing for emergencies (like a freeze)

Some business are operating with altered hours or closed altogether as the city issued a notice for residents to avoid all non-essential travel.

TxDOT and Bexar County are continuing to treat roadways and selectively closing roads and highways. You can find the list of road closures here:

Walsh said city services will resume Friday morning at 11 a.m. Solid Waste Services which will have “a little bit of a late start.

The city’s Pre-K for SA Centers will be closed and most area school districts have cancelled on Friday.

Service has been temporarily suspended at the Community Labs and Curative testing sites on Friday along with the city-run mass vaccination site. They will reopen at 8 a.m. Monday.

The city is operating four warming centers located at:

VIA is offering free transportation for families to warming centers by calling 3-1-1.